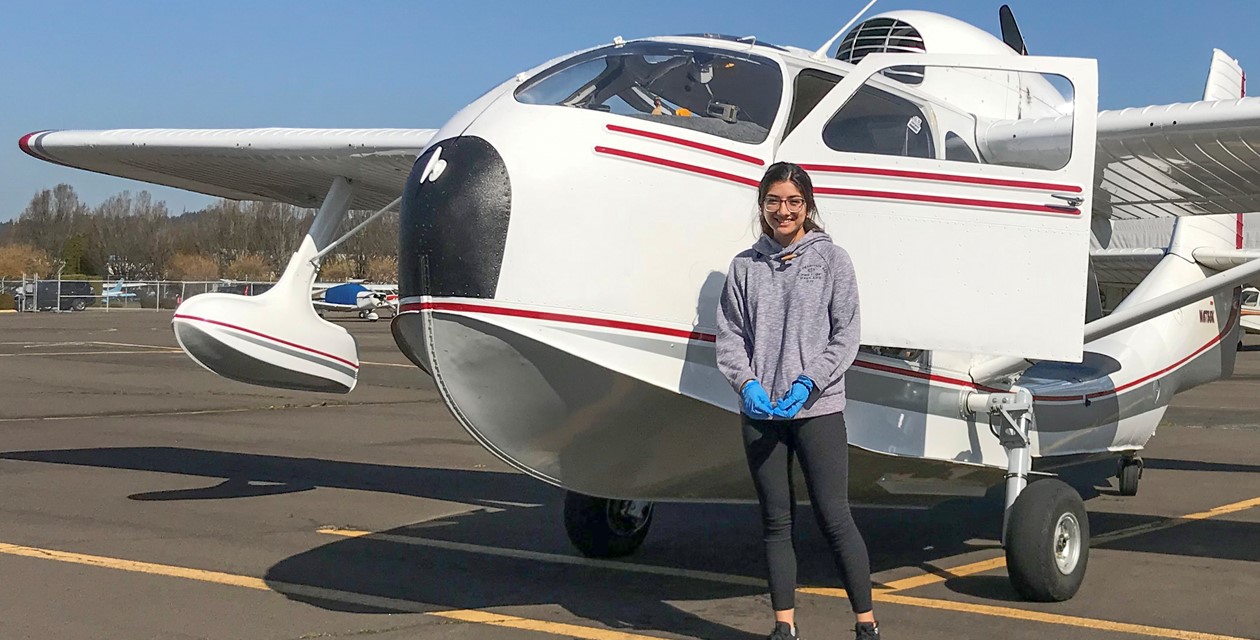 SEATTLE, Aug. 21, 2020—The Museum of Flight’s Boeing Academy for STEM Learning awarded $217,000 in scholarships to 14 Washington state high school students for post-secondary education and flight training during a virtual ceremony held on August 5. The ceremony was emceed by outgoing Vice President of Education, Reba Gilman and featured keynote speaker, astronaut and former Museum of Flight President, Dr. Bonnie Dunbar. The fourteen recipients represent a racial and economic diversity of male and female students with dreams of STEM and aerospace careers.

The Museum’s annual scholarships are made possible through generous endowments and funds established by the Estate of Frank “Sam” and Betty Houston; Jim and Sue Johnson; Alaska Airlines; Benjamin L. Ellison; Bill Ayer; Stephen and Hazel Eastman and their family members; and Chris and Leon Knopp in honor of their father, Stuart D. Knopp.

Image: Stuti Dahal, senior at Auburn Mountainview High School, Auburn, Wash. Stuti was born in Nepal and moved to the United States when she was twelve years old. She is the recipient of two Museum 2020 scholarships: for flight training and post-secondary education. Photo The Museum of Flight.

THE AWARDS
2020 Frank “Sam” and Betty Houston Post-Secondary STEM Education Scholarship Recipient | Up to $29,500 per year for four years of post-secondary education:

Rafael Urrea, a graduate of Raisbeck Aviation High School, Tukwila, Wash. Urrea has also participated in the Museum’s Aeronautical Science Pathway (ASP) Program for two years, earning 60 free college credits and 6 high school credits. “The most beneficial part of my learning experience at The Museum of Flight has been the incredible opportunities I have had to immerse myself in the world of aviation.”

2020 Frank “Sam” and Betty Houston Post-Secondary Flight Training Scholarship Recipients | Up to $12,000 each toward earning a Private Pilot license:

William Fleshman, a junior at Bonney Lake High School, Bonney Lake, Wash. Fleshman has already begun Private Pilot training, and currently participates in the Museum’s ASP program. “I am honored to be able to include this experience and accomplishment on my resume and also get a head start into the aviation industry.”

William Esposito, a homeschooled senior residing in Everett, Wash. Esposito has participated in the Museum’s Western Aerospace Scholars Sophomore program and is currently enrolled in the Museum’s ASP program. “The most beneficial part of my Museum experiences has been further development of my work ethic, holding myself accountable, being professional, and working effectively on a team.”

Steven Rosengren, a senior at Kentridge High School, Kent, Wash. Employed as lifeguard during the summer, Rosengren has participated in the Museum’s ASP program. “Book learning and study are essential, but being able to apply classroom content to an actual aircraft was, for me, priceless.”

Roman Thomas, a freshman at Bellarmine Preparatory School, Tacoma, Wash. Thomas is a violinist in the school’s chamber orchestra, and a member of the Model United Nations Program. “Each day I was greeted by an enthusiastic staff of aviation professionals who truly wanted to help me succeed and achieve my goal of becoming a pilot.”

2020 Alaska Airlines Flight Training Scholarship | Up to $10,000 toward earning a Private Pilot License:

Francesca Keel, a junior at Meadowdale High School, Edmonds, Wash. Keel is enrolled in the Museum’s ASP program, and has her sights on becoming a U.S. Air Force pilot. “For eight years, our family was separated from my dad while he worked for Boeing in Seattle. Being in ASP has reinforced a relationship with my dad due to our mutual interest in aviation.”

2020 Benjamin L. Ellison Future Pilot Scholarship Recipients | Up to $6,000 each toward solo, with the potential for additional funding to earn a Private Pilot license:

Samantha Schrama, a senior at Auburn Mountainview High School, Auburn, Wash. Schrama is enrolled in the Museum’s ASP program, and works weekends to help finance her flight training in pursuit of a career in aviation. “When I joined the Aeronautical Science Pathway I was introduced to a network of inspirational women who were pilots in command of an aircraft. That’s when I knew it was something I wanted to accomplish.”

Stephen Green, a senior at Rogers High School, Puyallup, Wash. Green participated in the Museum’s ASP program, and recently earned a Private Pilot license. “Through this course I have learned more about aviation than ever before. This course has given me so many opportunities that have changed my life.”

Tricia Kimball, a senior at Federal Way High School, Federal Way, Wash. Kimball is enrolled in the Museum’s ASP program and will attend the University of Washington this fall. “I know that I am fully prepared to realize my dream of becoming an Air Force Pilot.”

Stuti Dahal, senior at Auburn Mountainview High School, Auburn, Wash. Stuti was born in Nepal and moved to the United States when she was twelve years old. “Someone told me that one cannot dream of something that one cannot see. I never dreamt of becoming a pilot in Nepal because I had no source of a dream. This changed when we moved to the USA. I saw female pilots which gave me a source to dream.”

Nicholas Petregal-Lemay, a senior at Lake Washington High School, Kirkland, Wash. Petregal-Lemay has participated in the Museum’s Aerospace Camp Experience, Private Pilot Ground School, and Western Aerospace Scholars Sophomore and Junior programs. “Although I did not have the opportunity to attend a “STEM” high school, I could still prepare for and ultimately obtain a career in the aerospace industry.”

Devin Graves, a senior at Mount Rainier High School, Des Moines, Wash. Graves attended the Museum’s Aerospace Camp Experience for eight summers, then became a volunteer in the Counselor Apprenticeship Program for two years, and finally worked as a counselor for one year. He also participated in Private Pilot Ground School. “The Museum of Flight is such an essential part of my life and passion for aviation that I consider it a home away from home.”

Atharva Kashyap, a senior at Interlake High School, Bellevue, Wash. Kashyap was born in India and moved to the United States in 2015. He has participated in multiple education programs at The Museum of Flight, including Private Pilot Ground School and Western Aerospace Scholars Sophomore and Junior programs. “Being involved in Museum of Flight programs has introduced me to professionals who are engaged in the aerospace field, thus introducing me to the various career options that this field has to offer. Their experiences gave me a line of sight to career and education options that I can explore.”

The Museum of Flight’s Boeing Academy for STEM Learning
All education programs at The Museum of Flight operate under the umbrella of
The Boeing Academy for STEM Learning, which was created in 2015 through a major investment by The Boeing Company and Mr. and Mrs. William E. Boeing, Jr. From pre-kindergarten to college prep and career readiness programs, the Academy provides unparalleled learning opportunities for students to explore and prepare for education and career pathways in flight, engineering, and space.

The Academy strives to accelerate opportunities for all youth, with particular focus on under-resourced and underrepresented populations, by connecting them to fulfilling, in-demand STEM careers. The Academy operates in partnership with schools, community-based organizations, government, business and industry to ensure that the next generation of workers are ready to lead and innovate. The Academy awarded over $314,000 in student scholarships in 2019.