Chronicles Of The Museum 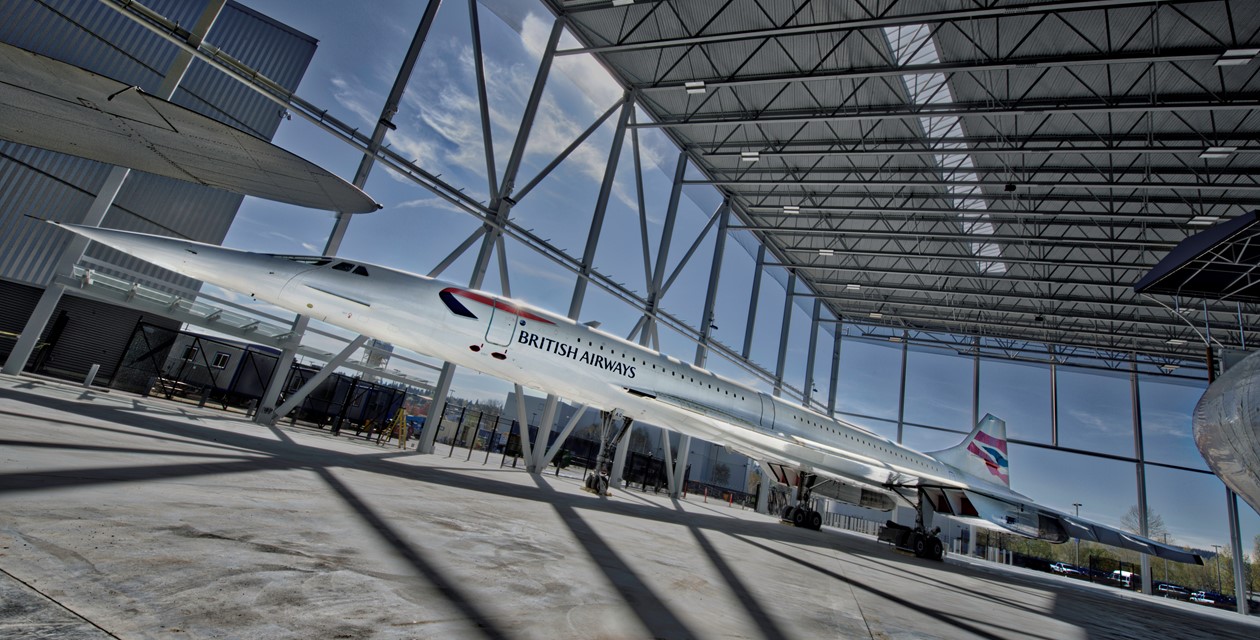 The Museum of Flight never ceases to amaze—our incredible aircraft, artifacts and experiences are full of interesting stories and secrets.

The Museum's Grumman Cougar can be seen in the 1982 movie An Officer and a Gentleman.

The Museum's Boeing B-17 was featured in multiple movies including Tora! Tora! Tora! and Memphis Belle.

Early in its career, the Air Force One that's on display at the Museum was secretly outfitted as a spy plane by the CIA. The program was code-named Operation Lida Rose and was so secret that not even President Eisenhower knew about it.

Our rare Stinson Model "O" reproduction is the solitary model in existence.

At the time of the Battle of Britain, the Supermarine Mark 1 Spitfires were all equipped with eight .303 machine guns, four on each side. However, their effectiveness was greatly reduced after 1940 with the onset of armor protection for planes. Spitfires were later reconfigured with 20mm cannons instead.

During the Cold War, two Lockheed Blackbirds were modified to carry the D-21, a supersonic drone that was designed to fly on high-risk missions. One was lost in a tragic accident during the test program, and our model is the lone survivor of this James Bondian program.

Because of the extreme frictional heat generated during supersonic flight, the Blackbird's fuselage was made of panels that would expand when heated and fit snugly together during flight. While on the ground, jet fuel would leak through the loosely fitting components.

Our Corsair was found at the bottom of Lake Washington by scuba divers. The Museum managed its rescue and restoration.

Our Caproni Ca.20 survived both World Wars in storage and eventually ended up in the attic of a thirteenth century monastery outside Milan, Italy. The plane was recovered by our Director of Aircraft who was traveling in Italy on his honeymoon.

The Night Witches were an all-women regiment of the Soviet Air Forces during World War II. Officially designated the 588th and later the 46th Taman Guard Bomber Regiment, they flew nighttime bombing missions against the German army. German soldiers dubbed them "Nachthexen" or "Night Witches" because of their stealth bombing tactics; by idling their engines as they approached targets, Night Witches could glide in quietly and release their bombs with minimal detection.

The Boeing B-47 Stratojet flew very high and fast for its day and was utilized for long trips, though its design came with some challenges. If the nose of the B-47 was brought up, the wing angle was increased and put the pilot at risk of stalling because the air was so thin at flying altitude. However, if the nose was lowered, the plane would approach the speed of sound, which was only a few knots-per-hour apart from its stalling speed. Since autopilot wasn’t capable of that level of speed control accuracy, these planes were hand flown for trips that lasted many hours, providing a tedious challenge for the pilots who could not vary their speed more than 10 to 15 knots.

Steve Stimpson, a manager at Boeing Air Transport, initially considered hiring male stewards as onboard attendants to passengers. Registered nurse and pilot Ellen Church pitched the idea of hiring female nurses instead. She became the world's first airline stewardess in 1930 and served as head stewardess for BAT until 1932.

Before they were married, Walter Beech, founder of Beech Aircraft Company, met Olive Ann Mellor when she became a new secretary at Travel Air Company. Being a gentleman, Walter offered to take Olive up for a flight in a tandem seat Barnstormer biplane. Olive Ann agreed as long as he didn’t do any stunts. But, once they were in the air, Walter did all sorts of flying stunts, trying to impress her. However, when he looked back to see how she was doing, Olive Ann was was gone! Walter flew all over looking for her and desperately decided to land and seek help from her friends and family. When he went to her parent’s house with the bad news, Olive Ann answered the door! For breaking his promise about the stunts, Olive had decided to give him a panic in return and had gotten down on the floor of the plane during his stunts, then crawled out of the plane after he landed without being noticed. Payback! Olive Ann’s picture is currently located at the Beechcraft air ambulance board.

An Italian visitor said his physics professor was the first Italian astronaut and shared a story of his professor in the International Space Station (ISS). One day, the ISS team announced they were having spaghetti for dinner, but the Italian astronaut refused to eat it, saying his mother was a phenomenal cook, so he just doesn’t eat most spaghetti. After his fellow astronauts begged him to try it, he admitted it was amazing and the team started to laugh—apparently NASA heard he was a picky eater and had his mother cook large batches of her spaghetti, which they freeze dried and sent to the ISS. The Italian astronaut was eating his mom’s home cooked spaghetti in outer space!

During WWI in England, weather and night flying conditions made German airship navigation and bombing accuracy extremely difficult. Bombs were often dropped miles off target—one raid on London ended up bombing Hull—and accurate targeting of military installations was impossible. During the war, a German Graf Zeppelin airship was caught offshore in a storm and crashed, losing the whole crew with the exception of a monkey. The monkey got ashore in England and was quickly captured due to his German uniform. The villagers made the monkey go to trial as a German spy.

A visitor who used to fly the B-47 for meteorological research said when Russia or China set off nuclear bombs, he was tasked to fly through the clouds and take air samples that would determine the type of bomb that was detonated and what the geology of the area was. After one of these flights through the bomb clouds, the pilot walked passed a shed of Geiger counters and set off all the alarms, discovering that his flying suit had become a radioactive suit.

“A retired Air Force Lieutenant Colonel visited the museum with his family and the Dutch farmer who helped him when he bailed out of his aircraft over the Netherlands during WWII. The farmer hid the airman in his rabbit shed until the Dutch resistance could connect with him. The two families have kept in touch all these years and all came to the Museum together to celebrate the Colonel’s 90+ birthday!”

“When I think about my time, here I immediately think of the huge exotic programs I’ve taught. There is nothing like teaching over 3,000 students in a tent in the middle of the Arabian desert while a sand storm blows over us, or seeing that spark of insight and understanding in a student when you do not speak the same language, proving that our incredible educational programs supersede any political or language barriers.”

“During astronaut John Herring’s presentation, I saw a child decked out in an orange astronaut suit. His mother told me this little boy ‘takes aerospace very seriously’ and went on to share that at the age of four he would ask her to read to him from the Boeing Engineering Manual for his bedtime story. She loved that the Museum had not only nurtured his interest in aerospace but fostered a sense of curiosity which you could see in him as he giddily bounded around from gallery to gallery.”

“One little ACE Program camper drew me a picture of himself in space and told me he wanted to be an astronomer just like me.”

“A visitor from Ireland was scheduled to leave the airport but wanted to look at the B-17 before he left. There was one tour remaining for the B-17 that day, so I told him to hurry and get his ticket. He returned to regretfully inform me that he was not allowed to buy a ticket because his sandals couldn’t be worn inside the plane. I asked him was size shoe he was and quickly switched shoes with him so he could take a tour. The visitor got the ticket and since I was in my stockings and his sandals another guide gave the tour of the plane. Seeing the smile on his face when he returned was worth it!”

”While visiting the Museum recently with my four year-old granddaughter, she was enthralled by all of the interactive experiences the Museum has to offer. She had a ball at your Rocket Launcher in the Space Shuttle Gallery, she must have played with it for 5 minutes! Thank you for having such a kid-friendly Museum.”

“A visitor said his dad had to bail out of the B-17 when he was a crew member involved in flying bombing raids over Germany. Once the visitor got in the plane he spent a long time looking down through the bomb bay his dad jumped out of. He said he wondered what it had been like for his father to have the courage to jump out of the bomb bay while the plane was on fire and going down. He said his father survived the jump and was rescued by a farmer and his wife in Belgium. His father ended up surviving the war and made it back to the states.”

“A grandfather brought his family to the Museum and shared his WWII experiences by the P-47. After 10 minutes of his story telling, the granddaughter said, “Grandpa, I didn’t know you did all that when you were nineteen.” Indeed it was a special moment.”

“A lady who’s father had flown a mission to Japan in WWII as pilot in a B-29 asked if she could visit our plane. She arrived with a photograph of her father’s crew for that mission posing in front of the plane. As she entered the B-29 and sat in the pilot’s seat, she told me how meaningful it was for her to be able to sit in the exact seat that her late father had sat in 70 years before.”

“A little girl in the ACE Program told me that I inspired her to be a scientist, exclaiming that ‘I didn’t know scientists could wear jewelry!’ She said that it was a relief seeing me in my profession embracing fashion, since she didn’t see herself in media’s nerdy scientist stereotype. She said she needed a role model she could see herself in to consider that path.”

“I toured a group of three high-school interns and took them into the flight simulators. As they flew and tried a few barrel rolls in the simulator, they were stunned to learn that they could pursue their pilot license right now at age 16. I let them know that the Museum offers pilot ground school for school credit and they became inspired by this exciting opportunity over their unknown career opportunities after college. In just one hour of my time I opened up a new world of possibilities to three young, ambitious students.”

The Blackbird family of aircraft cruised at speeds of more than Mach 3 and flew over 85,000 feet...